The text-based session watermark is a built-in Citrix Virtual Apps and Desktops functionality that creates a text overlay in the Citrix sessions that can assist in the deterrence and tracking of data theft.

Enabling the Text-based session watermark feature can potentially bring negative effect to the end user experience of the session, but Citrix has no definitive numbers published on the magnitude or the extend of the impact.

In this research, GO-EUC will focus on quantifying the impact of the text-based session watermark feature in CVAD.

Session watermarking was introduced in CVAD 7.16 as an experimental feature and later on added to the feature list of CVAD 7.17 in 2018.

The Text-based session watermark feature (hereafter abbreviated to watermark) is supported on both single and multiuser OS’s, on both Desktop and Server OS and requires a minimum of Virtual Delivery Agent version 7.17.

As the name implies this feature allows administrators to add a transparent text-based watermark to the session of the users.

Traceability when information from Citrix sessions has leaked. The feature functions just like the watermark features of Adobe Acrobat PDF for example by ‘superimposing’ a semi-transparent text overlay over the entire session of the end users.

This watermark will therefor also show up in pictures and screenshots taken from a user’s session.

Be aware that the watermark labels on pictures and screenshots taken from a session could be removed, distorted, modified or falsified using a variety of methods.

There are a couple of limitations, such as the fact that screen captures taken from within the VDA will not include the watermark.

The textual information to displayed for the watermark is configurable and can include the following information:

There are two style options available, one where they overlay is in the center of the Session and one where the information is on the 4 corners of the session: 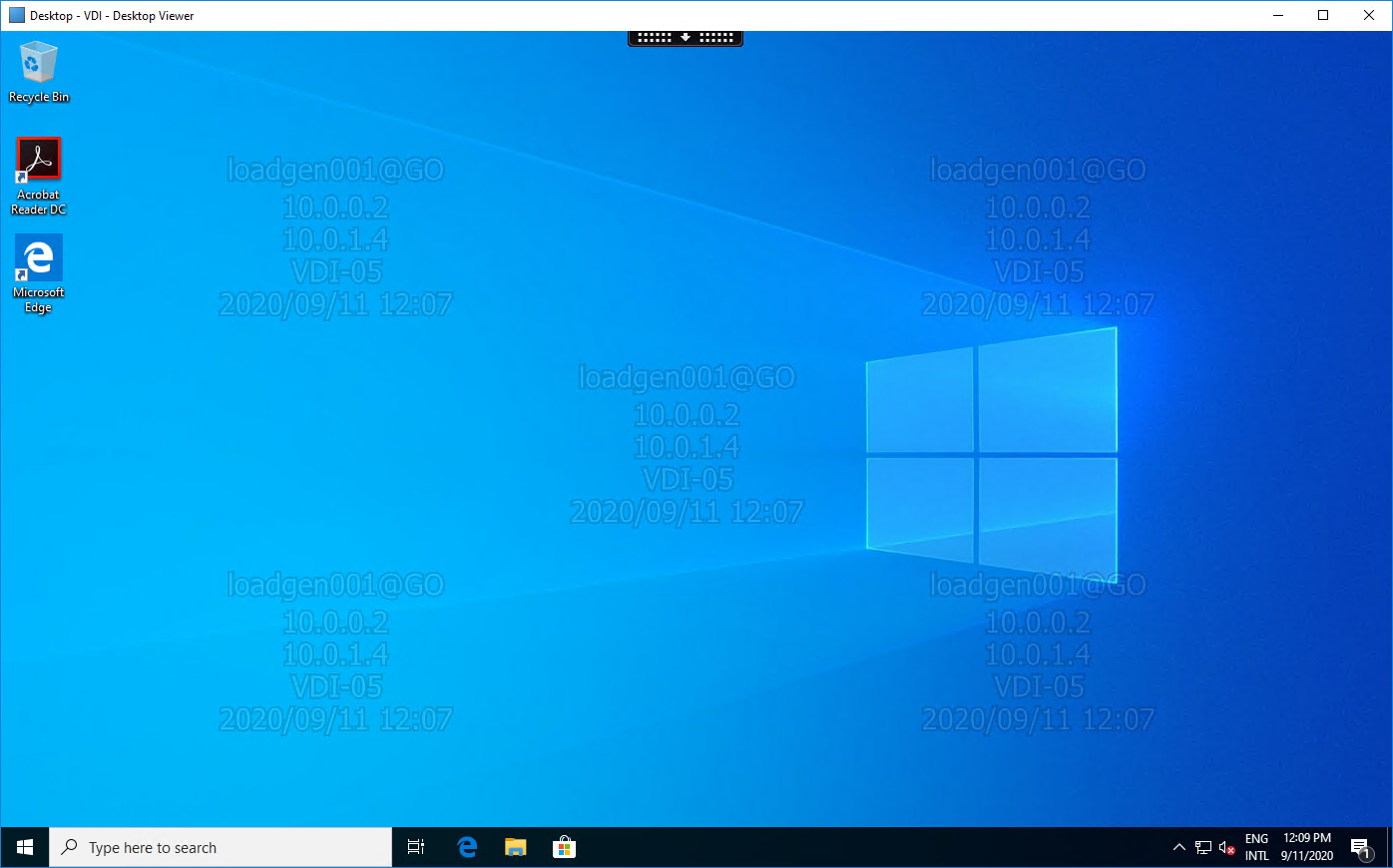 For this research there are two scenarios defined:

In the second scenario were the text-based watermark is enabled the following policies have been set:

All other Citrix policies were kept at default; This means the ‘video codec for compression’ setting was left at the default ‘Use video codec when preferred’ setting and ‘Visual quality’ was also left at default (medium).

Please note that the setting we defined do not align with Citrix best practices and are for the evaluation of the performance impact only. It is not recommended that you set these policies in a production environment without testing.

This will result in a configuration that will have a user experience similar to the example below:

This research has taken place on the GO-EUC infrastructure, which is described here. Windows 10 1809 is used as the default deployment, configured with 2vCPU’s and 4GB memory. The VDIs are delivered using Citrix MCS, running version 2003. The default applications are installed, including Microsoft Office 2016. The image is fully patched and optimized with Citrix Optimizer, using the default template and recommended settings.

GO-EUC uses a custom workload and content library, that are described in detail here.

As Citrix states in the documentation, enabling the session watermark feature could result in a degradation of the user experience. In our case we’ve, with the settings that have been configured we expect a degradation in scalability as well as an increase in bandwidth usage.

Host CPU usage does not suffer from the session watermark significantly. Overall the impact is only measured at 1% across the board. Because the main limitation in the GO-EUC lab is CPU, this CPU constraint means there should be no measurable impact on the user density when using the session watermark feature.

Now with FPS the initial expectation was that the watermark could have an impact on the FPS counts, but there is no discernible in- or decrease in FPS.

Because the session watermark is added before Thinwire encoding, it appears to have no impact on FPS, and therefore should most likely have only a minimal to no impact on the user experience. (apart from the fact that users will notice the watermark). As there is no way to adjust the opacity of the session watermark at this moment, the watermark could be experienced somewhere between barely noticeable to frustratingly visible by an end user like shown in the video above.

The session round trip time and latency metrics show seemingly irreconcilable differences, as is clearly visible around 36 minutes of the test. There are no clear indications that data is invalid and the data is consistent across all 10 runs without any outliers in any of the runs. The averages are also compared from the different sessions, and these numbers also seem consistent.

At the moment the speculation is that the differences in the data might be related to the polling interval of Remote Display Analyzer (RDA) tooling that is used to analyze the protocol data, but at this point there isn’t a conclusive answer as of yet and such analysis would go beyond the scope of this research.

For these ‘corrected’ charts we’ve corrected the data by removing outliers (3 datapoints in total) from the measurements.

Coincidentally the data in the comparison is exactly the same if we had used the 95th percentile in this case.

The Thinwire protocol reduces bandwidth by employing an algorithm that detects duplicate images and uses caching and buffering in order to avoid having to re-send these images. Because the watermark is created and superimposed on the image </i>before the Thinwire encoding happens, the effectiveness of the algorithm in detecting duplicate regions will be affected.

Because the Thinwire codec has a more difficult time in detecting and encoding the images, the CPU for Encoding is also increased when using a watermark. This could be potentially be countered by adding a vCPU to the VDA, were it not that the watermark feature is not supported yet with hardware encoding.

The most important aspect of the watermark will most likely in most real-world scenarios be the impact that the session watermark has on the endpoint device. In the case of the GO-EUC lab, the LoadGen bots, from which the performance data is collected, represent the endpoint devices.

The observed impact on the LoadGen bots is significant. It should go without saying, that the more the watermark covers parts of the screen or region, the bigger the impact will be. This is also the reason why Citrix recommends not more than 2 elements.

The endpoint impact could potentially negatively affect the user experience, if the endpoint is not capable of decoding the images fast enough. For more information on the real user experience from different endpoints and the shortcomings, consult the delivered user experience of thin clients playlist on the GO-EUC YouTube channel.

Results show that the impact of a session watermark on the VDA side is only minimal, but there is a clear increase in bandwidth, which is expected and in line with Citrix recommendations.

The data shows that the impact of a session watermark is minimal on the VDA sized. The main impact is on the endpoints and the bandwidth used.

The impact on the VDA size might be further mitigated when Citrix add support for Hardware encoded session and offloads the overlaying of the watermark to the GPU.

Another option would be to integrate the session watermark in the video stream with by using stenography, but that technology is known to be very CPU heavy.

Furthermore, please note it is not that difficult to bypass the session watermark with photo editing tools like Adobe Photoshop, keep in that in mind when considering using session watermark in a production environment.

Are you using the text-based session watermark feature you Citrix environments? Please let us know and discuss below or in our Slack Channel.